The Film and TV program is designed to prepare students to apply technical knowledge and skill in the broadcast journalism, film video, and live or mixed media productions, as well as prepare students for employment in various positions within Radio, TV and Film Industries.

Film and TV students are encouraged to join this CTSO 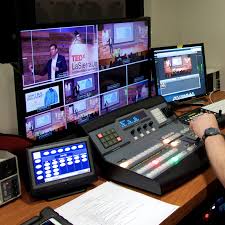 Film and TV 2 builds on the skills learned in Film and TV 1. This advanced class will focus on broadcast and industrial video production techniques.

Film and TV 3 provides a focus on creating, critiquing and producing broadcast quality projects that will meet the needs of clients or be submitted to competitions.  Students will prepare and take Adobe Premiere Pro industry certification.

Annual salary based on data from www.onetonline.org

I got my start as a filmmaker by taking beginning media production at Foothills. Fun fact: Freshman year, I won a film contest with two other CFHS students. Kate Bradley, Dylan Souza and I created a video that shows an Entertainment book ripping itself apart and forming pictures of items people could save money on if they purchased the book. The coupon books were the ones that the band sold as a fundraiser, so band is technically a part of my film career as well!

After graduation, I studied film production and interactive media games at USC. I’m currently a film producer for Godmother Industries. Prior to that, I was the head of production for Breakwater Studios, where I produced, budgeted, scheduled, cast, and location scouted two separate web-series episodes for NBC/Universal.

Advice to current students: stay connected to CFHS through the alumni social media sites. Through the alumni program on Facebook, I connected with fellow grad and filmmaker Jackson Stewart, who released a horror film late last year. I just finished mine, and there will hopefully be more news about it in the coming months!

← Back to CTE Homepage

CFSD is committed to making its website accessible to the widest possible audience, including individuals with disabilities.

Should any user have difficulty accessing the content of this site, please see Web Accessibility Guidelines for assistance.